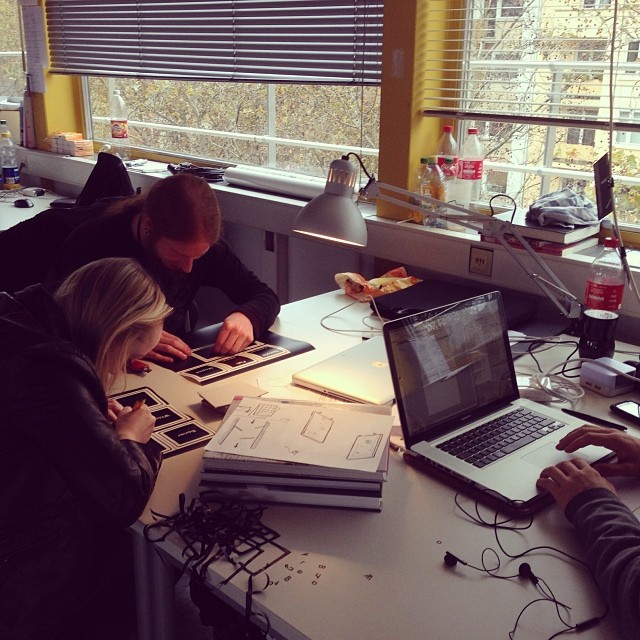 In November, Helen Armstrong travelled to Mainz, Germany, to work with graduate students at the Gutenberg-Intermedia Masters Program at the University of Applied Sciences, (www.gutenberg-intermedia.de/en/). Each incoming graduate class in this program takes on a different theme. The 2013 theme, “Design for Participation,” led to Armstrong’s invitation as their 2013 visiting lecturer. The students read Armstrong’s recent book Participate: Designing with User-Generated Content (co-authored with Zvezdana Stojmirovic) prior to my visit.

During her time in Mainz, Armstrong gave lectures and led two workshops. In addition, she worked with the students on projects for the upcoming Translations 4 symposium—a symposium held annually at the University of Applied Sciences.

Workshop One: The Secret Story Project

The first workshop, The Secret Story Project, asked each student to reveal a secret to the class and then distill that secret into a single word.* After sharing the secrets, the class then divided into five groups. Each group was asked to design an artifact using all of the single secret words. For the purpose of the project, these words could be translated into images, sketches, or sounds—or they could remain as words. The artwork to be used in the resulting artifact had to be solicited directly from fellow classmates.

*Thanks to Bernard Caniffe for introducing the idea of the secret story and single word to me at his 2013 AIGA workshop.

Above (top to bottom, right to left): Secret Coasters: This group posted the secret story words to Facebook and asked acquaintances to upload an image to correlate with each word. The resulting surprise images were paired with the words to form coasters. Each studio member received a coaster to use at their desk. Secret Anthology: Each participant created a dot style sketch of the word. The resulting sketches were then paired with the original stories to form a printed anthology. Key portions of the stories were blacked out to reinforce the confidential nature of each story. Each studio member received a copy. Secret Light: Each participant was asked to pantomime his/her secret story. The resulting videos were captured in still frames. The still frames were used to construct a light fixture to be hung in a meditative area of the studio. Secret Mugs: (not pictured) Each participant was asked to draw all of the secret words using a single uninterrupted line. The mass of resulting sketches were put together into patterns which were then printed on mugs for each studio member. Secret Symphony: Each participant recorded their secret story word in another language. These words were put together to form unique ringtones for each studio member. As a result, when a studio member’s phone rings, everyone in the studio is reminded of the individual’s secret story.

The second workshop followed a lecture discussing algorithmic design’s relationship to participatory design. In essence creating a participatory process is like creating an algorithm. The designer sets up parameters and then watches how the outcome plays out based on those parameters.

The Mensch-Maschine Project* asked designers to establish parameters for the design process itself. In essence each designer created an algorithm to experiment with the human as machine. Each student selected one letterform template and wrote down a rule for other participants to follow in order to complete the letterform. Letters were passed assembly-line style to other classroom participants who followed the initial rule as they worked to complete the letter. No discussion was allowed. Once each letter has been passed 8 times, it returned to the original person who completed the letterform and prepared it to be shared digitally. The final form of each letter was determined by the parameters initially set by each designer.

* Thanks to Zvezdana Stojmirovic who initially developed a variation of this project with me for our Out of My Hands Workshops in DC and Baltimore.

2013 graduate students in the Gutenberg-Intermedia Master Programme of the University of Applied Sciences, Mainz, German 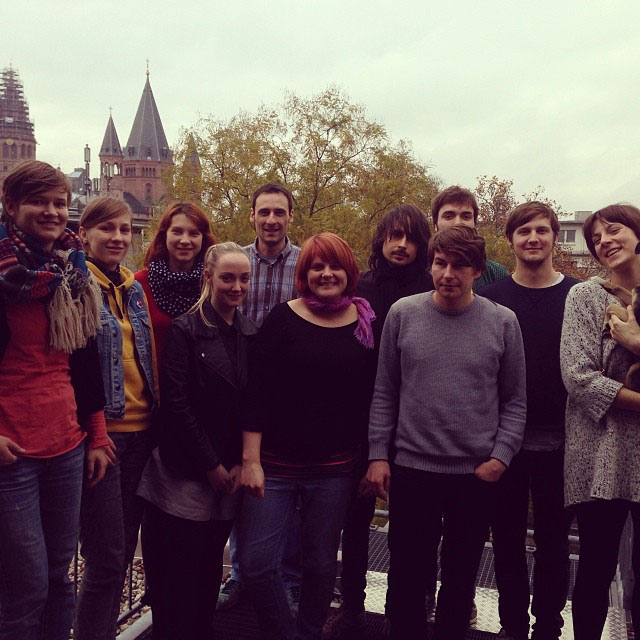